Please read the Introduction that I wrote in the article
devoted to calculating the binding energy of deuterium and tritium
(Published May 9, 2020)

1. Introduction
We continue the description devoted to the direct derivation of the binding energy of atoms, begun in Part 1 and 2 of this article [1, 2], which became possible thanks to the key discoveries made in the framework of the Wave model (WM).
At the beginning of this last part of the article, I decided to remind some of the ideas that led us to the creation of the WM. They are directly related to the problem considered here.
As known, particular solutions (potential component)

(1)
of the wave equation

We presented the above solutions for the first time in physics in graphical form, moreover, in such a way as shown in Fig. 1 [3, 4].

give the spatial angular coordinates of the nodes of standing spherical waves (and toroidal vortices-rings, for m=0) on the corresponding radial wave shells described by the radial function 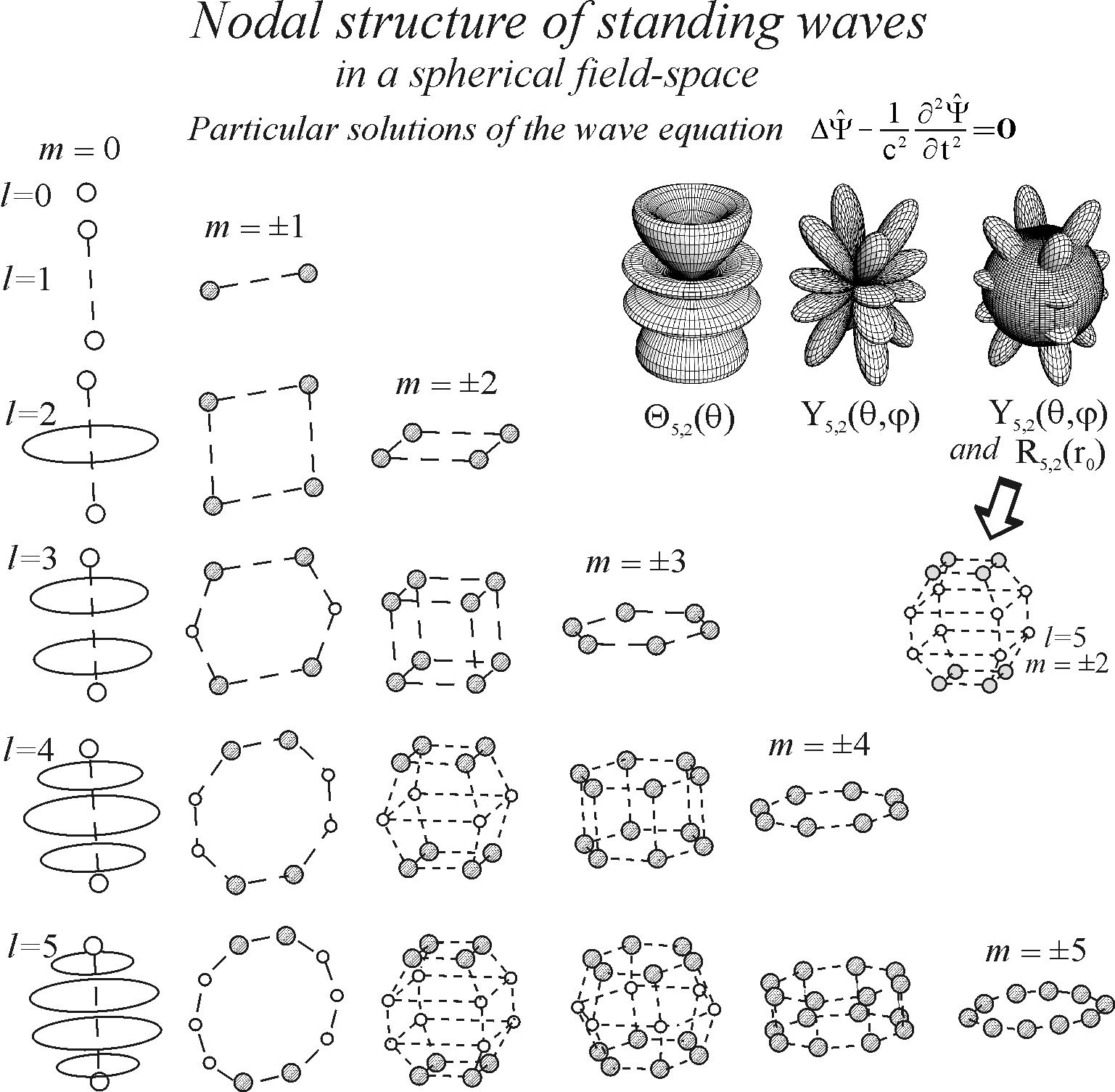 Analyzing the obtained solutions, we assigned serial numbers to the principal potential polar-azimuthal wave nodes, in the order of increasing their numbers in wave shells, starting from the nodal shell corresponding to the solution for l=1 and m=±1.

Having accomplished this, we found a striking correlation of the number of such nodes in wave shells with atomic numbers Z of elements in the periodic table [3, 4], assuming herewith that each of the nodes of the stable atomic isotopes contains two coupled nucleons.

We also drew attention to the periodic quasi-similarity of the nodal structure (depending on the quantum numbers l and m [5]), which clearly correlates with the periodicity of the chemical and physical properties of the elements grouped in the periodic table.

Ultimately, we understood and completely convinced that solutions (1) describe the nodal structure of wave shells of atoms. Thus, we have come to the discovery of a shell-nodal (molecule-like) structure of atoms that atoms are elementary molecules of nucleons.

A graphical representation of the solutions, indicating their relation to the description of the atoms and revealing the primary nature of the observed periodicity of the chemical (and other) properties of the elements of the periodic table, is shown in Fig. 2. 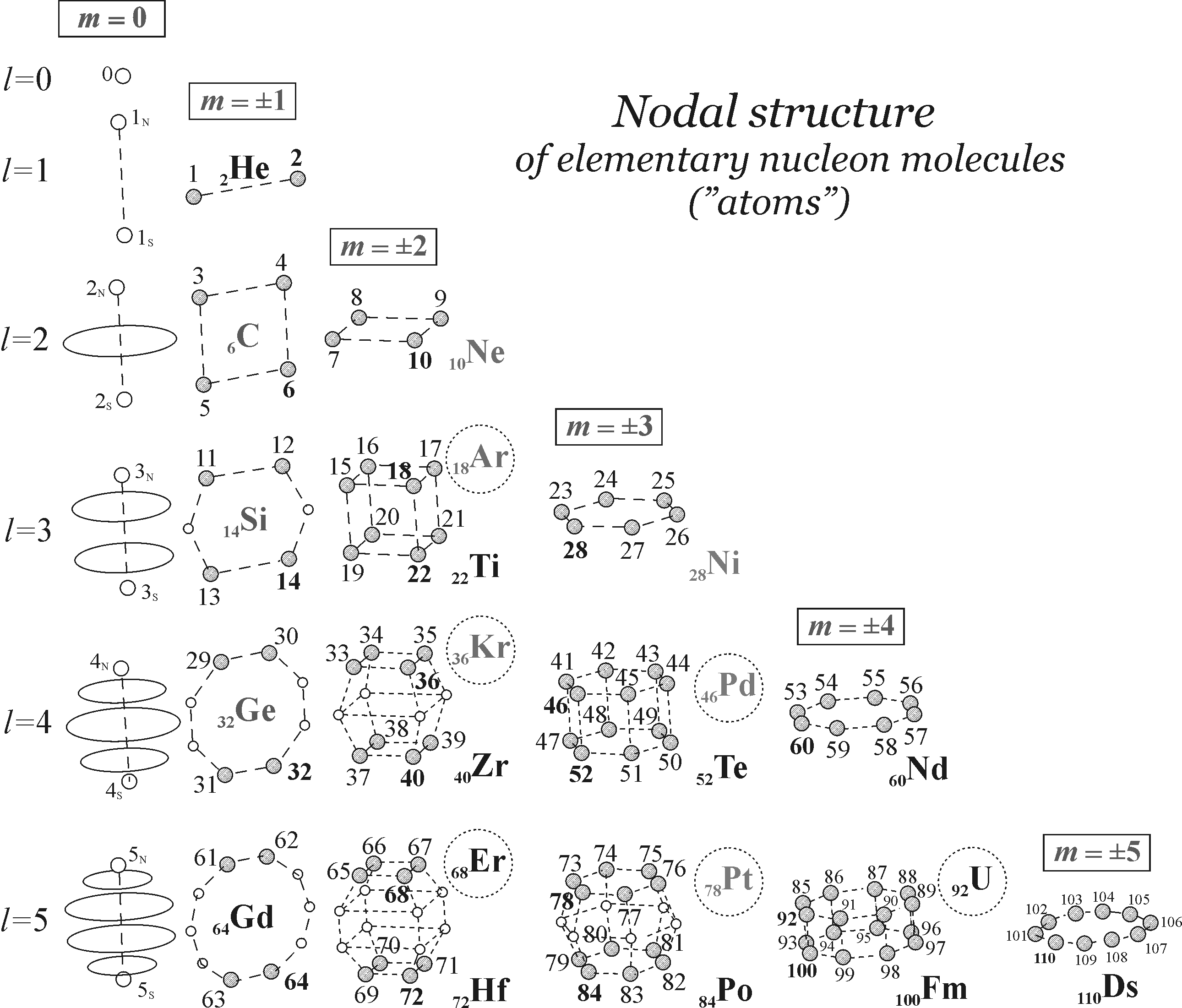 We assigned serial numbers only to the main potential polar-azimuthal nodes (shown in dark circles). Only symbols of atoms having external wave shells, fully complete and half-completed with the given nodes, are indicated in the figure.

Thus, the physical meaning of the solutions (presented in Fig. 1), previously unknown in physics, was discovered in this way. The above solutions showed that atoms are wave formations and their structure is identical to the nodal structure of standing waves in a spherical field.

The nodal structure of each subsequent atom, from the lightest to the heaviest, is different. This is due to the different number of nodes in their external wave shells. Changing the number of nodes characteristic to the outer shell of the previous atom by one more is accompanied by a rearrangement of the spatial disposition of the nodes. As a result, a more complex nodal structure is formed, different from the previous one, inherent in the subsequent havier individual atom.

Apparently, the phenomenon of semiconductivity of Si and Ge is caused precisely by the presence of such nodes in their external shells: two in Si and four in Ge, respectively.

The external shell of the gadolinium atom (belonging to the same group with C, Si, and Ge) contains six such empty collateral nodes compared the four main nodes filled with coupled nucleons. Maybe for this reason gadolinium is characterized by the highest capture cross section of thermal neutron among all elements. Such a large capture cross-section makes it possible to use gadolinium in controlling a nuclear chain reaction and for protection against neutrons.

We note here only a few features, which we immediately noticed, starting to analyze the obtained solutions, which we would like to draw the attention of readers.

Sequence numbers 1, 2, 3,. .., 110, which we assigned to the principal potential polar-azimuthal nodes, correspond to the atomic numbers Z of the elements of the Periodic Table.

Nucleon molecules (“atoms”), symbols of which are indicated in Fig. 2 at the corresponding fully completed and half-completed shells and subshells (with the even number of nodes in them), differ from others (not indicated here) for the above reason by the more equilibrium structure of their external wave shells.

Nucleon molecules (“atoms”) having fully completed l-shells (from l=1 to l=5) are, respectively:

Nucleon molecules (“atoms”), the outer shells of which are quasi-similar fully completed m-shells (subshells of the l-shells), are:

Fig. 3.Outer quasi-similar shells of elementary nucleon molecules (”atoms”) of the 4th group of the periodic table of elements.

Nucleon molecules (“atoms”), the outer shells of which are similar completed and half-completed (indicated in Fig. 2 in dotted circles) m-shells, are as follows:

External nodes of uncompleted external shells and subshells: half-completed (shown above) and partially filled, such as the shells of 3Li, 4Be, 5B or 7N, 8O, 9F, etc. are in equatorial plane (z=0), like the shells of 10Ne, 28Ni … Such shells have any-fold symmetry, including forbidden by mathematical laws of crystallography. This follows from corresponding noninteger solutions, which describe intermediate states [4, 5].

So, analyzing solutions (1), we came to the discovery of the molecule-like structure of atoms. Atoms are elementary molecules of nucleons whose structure is identical to the nodal structure of standing waves in a spherical wave field-space.

All details about the solutions of the wave equation, including presented in the form shown above and in other forms, are considered in [3, 4]; some details can also be found, for example, in [5].

In our further consideration, we will refer to Fig. 2.