In Einstein's explanation of the famous formula

, there is nothing mentioned about a reason of entering the speed of light c in this formula. Modern physics is still unable to elucidate it as well. A new approach, in the framework of Dynamic Model of Elementary Particles, apparently, reveals this great mystery. Here is a summary of this approach.

Let us imagine an elementary particle as a dynamic spherical microobject of a complicated structure being in a dynamic equilibrium with environment through the wave process of the definite frequency ω. Longitudinal oscillations of its wave shell in the radial direction provide an interaction of the particle with other objects and the ambient field of matter-space-time. 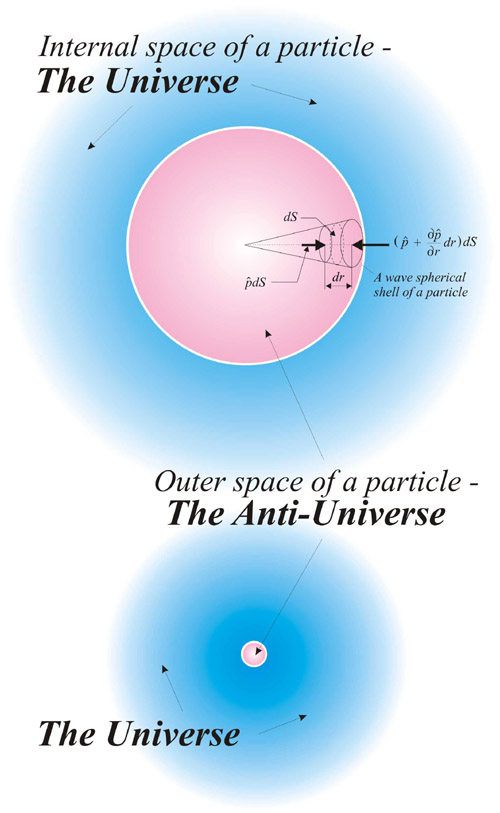 (dr and dS are the thickness and area of an element of volume of the wave shell in a spherical field of exchange*: a particle - ambient field of matter-space-time;

are powers of exchange of the field with the element of shell of the particle,

is the wave number corresponding to the fundamental frequency ω of the field of exchange at the subatomic level).

The very important results have been obtained in the framework of this model. We will enumerate them; but before that, let us remind the readers the sad fact that since then the famous formula

was obtained in Einstein's manipulation of the fictitious mathematical empty spaces, physics has no answer to the principal question:

What is the cause of the relationship, which exists between the rest mass of a particle m0 and the speed of light c in the formula where motion is out of the question? Or, in other words,

Why does the speed of light c play the fundamental role for the internal energy of a particle E?

The Standard Model of Elementary Particles (SM) is unable to explain it. By this reason, and not only, it is widely recognized, the SM "will not be the final theory" and "any efforts should be undertaken to finds hints for new physics"**. Experimentalists and theorists all over the world are actively trying to find ways to move beyond the current particle physics paradigm.

The SM was designed within the framework of Quantum Field Theory (QFT), consistent both with Quantum Mechanics and the Special Theory of Relativity. But QFT is not applied to General Relativity and, therefore, the SM cannot unify fundamental interactions with gravity.

There are many promising ideas to replace SM. In the SM, particles are considered to be points. In String Theory, a "string" is a single fundamental building block for all particles. There are five different theories of strings (three superstrings and two heterotic strings). There is also an underlying theory called M-theory of which all string theories are only. M-theory considers that all the matter in the Universe consists of combinations of tiny membranes, etc. However, many problems of the SM are still open.

One of the promising found "hints for new physics"** is the aforementioned Dynamic Model of Elementary Particles (DM).

The advantage of the DM over SM and its correctness are reinforced by the fact that from this model the naturally (and logically) originates the nature of mass and charge of elementary particles and, hence, the nature of energy E=m0c2, and other unexplained (or unknown) earlier properties of objects and phenomena of nature.

As follows from the DM:


From the DM it also originates:

Thus, there are potentially enormous benefits in prospect from the further research within the DM.

* An existence and interactions of the particles are, in essence, a continuous process of the wave exchange of matter-space and motion-rest or, for brevity, exchange of matter-space-time. The wider notion exchange (instead of interaction) is more correct for such a model because it reflects behavior of elementary particles in their dynamic equilibrium with the ambient field, at rest and motion, and interactions with other objects (and particles themselves). In other words, the notion exchange is more appropriate from the point of view of the physics of the complex behavior of elementary particles, as the dynamic formations, belonging to one of the interrelated levels of the multilevel Universe. This notion was first introduced in the work "Alternative Picture of the World" in 1995.
** A quotation from [NuPECC report devoted to "Impact and Applications of Nuclear Science in Europe", 21-23 November, 2001 (France)].